An ironstone under clay tile country house with ancillary accommodation set in approximately 4 acres with views across 'Capability' Brown parkland.

Fawsley Little Hall extends to in excess of 7,230 sq. ft. and has many architectural features dating from the 17th and 18th centuries. It overlooks formal gardens and grounds extending to 4.17 acres in total, as well as the surrounding parkland of Fawsley Estate. There is additional ancillary accommodation in a one bedroom annexe over the quadruple garage and the one bedroom converted Lodge to the east of the main house.

Fawsley was a Royal manor as early as the 7th century. In 1416 Richard Knightley became Lord of the Manor at Fawsley and the family continued to have strong links with royalty for centuries, even entertaining Queen Elizabeth I in 1575 in the south wing of Fawsley Hall. The construction of Fawsley Hall commenced in the early part of the 16th century with the Tudor South Wing. Three further wings were added, these were The Great Hall, The Brew House and The Gate House.

In the 1760s and 1770s Lancelot 'Capability' Brown the landscape gardener, was engaged to transform the estate viewed from the manor house. He transformed the park by creating sweeping vistas, planting trees and laying lawns. Many of the trees planted can still be seen today. There are three lakes; Horsepond on the north side, the Canal on the south side and the largest of the three, Bigwaters. The Church of St. Mary dates from 1209 and is set on the east of the hall in the ornamental landscaped park.

Fawsley Little Hall was built in 2004 by the former owners of Fawsley Hall hotel and has been designed in the style of an Elizabethan manor house with a symmetrical facade and two projecting wings. It is built using reclaimed Northamptonshire ironstone in an elevated position with southerly views across the lakes and the parkland designed by 'Capability' Brown to open countryside.

To fully appreciate this beautiful and historic setting we would recommend allowing additional time to walk or drive along Fawsley Lane to take in the views across the parkland and lakes.

Double doors open into a full height entrance with gallery above and a gothic style door into the entrance hall.

This panelled room has limestone flooring and a wide central carved pine staircase to a half landing with staircases on either side to the galleried landing. Oak mullion windows with leaded lights look out to both the front and rear. French doors open on to the terrace with views over the Italianate gardens, parkland and open countryside.

The drawing room has a quadruple aspect with bay windows to either end and a door to the terrace. There is a central fireplace with marble surround and stone hearth. The room is adorned with fluted pilasters and deep covings. The dining room leads off the kitchen and has a bay window to the rear overlooking the terrace and a door leading on to it. This panelled room has wide oak floorboards, and an open fireplace with brick chimney breast which is open through to the garden room. A door leads to the library, whilst glazed doors either side of the chimney breast lead into the garden room.

The garden room is vaulted with exposed trusses and has a triple aspect with oak framed windows. The room has limestone flooring. The library has a bay window to the front and full height book cases and cupboards in reclaimed pine with carved end panels. The room has oak flooring to match the dining room.

The kitchen/breakfast room has a range of fitted base and full height units and a central island unit. The kitchen is well appointed with a Miele hob, an extractor canopy, two electric ovens, a warming drawer, dishwasher and fridge. A connecting door leads through to the utility room where there is a further range of base units, a central island, space and plumbing for a washing machine and tumble dryer and a full height fridge freezer.

The galleried landing has a seating area to the rear, taking advantage of the views over the terrace and grounds as well as the views over open countryside. The carved and gilded ceiling has Italian origins and is believed to date from the 17th century.

The master bedroom has oak flooring with a central raised plinth designed for the bed giving views over the gardens and grounds and one of the lakes. There is a range of full height wardrobes and a door to the dressing room and en suite which has a WC, wash basin, double shower and freestanding bath. Bedrooms two, three and four all have three piece en suites with a WC, wash basin and double shower cubicle.

There are two further rooms on the top floor with panoramic views to the south, and a three piece bathroom with a WC, wash basin and bath.

The annexe over the garages has a central sitting and dining area with bedroom to one end, kitchen with hob, extractor, sink and single electric oven and a three piece bathroom comprising a WC, wash basin and bath with shower over.

There are four garages, a WC and an internal staircase to the accommodation on the ground floor. Part of the first garage is used as a utility area for the flat above and contains the oil fired boiler. This can be accessed from outside.

The Lodge has been converted to provide self-contained ancillary accommodation and has limestone flooring to the ground floor, a central spiral staircase and glazed gable and bi-folding doors to the terrace. The ground floor creates an open plan sitting, dining and kitchen area with a range of built-in units, a central island and integrated appliances. There is a range of built-in wardrobes and cupboards to one side, electric underfloor heating and a multi-fuel stove.

The first floor mezzanine has a bedroom and three piece en suite with a WC, wash basin and double shower cubicle.

The property is approached through an electric gated entrance with the gravelled driveway in front of the main house leading to the front of the quadruple garage and adjacent to the converted Lodge. There are gardens and grounds to all sides.

The terrace to the rear of the property has a stone balustrade and steps down to the central water garden and fountain. A further flight of balustraded steps lead to an Italianate sunken garden with a lawned walkway flanked by herbaceous borders and a brick wall adorned with vines, clematis and roses. The lawned walkway leads to the paddock with views over the Fawsley Estate and parkland and lakes designed by 'Capability' Brown. A walnut grove is on the western boundary of the property along with an area of native woodland.

To the right of the entrance drive within the native woodland are garden sheds, oil tanks, a brick under tile boiler house and a further insulated timber garage with power and lighting.

Fawsley is a hamlet with beautiful lakes and St Mary's church which is isolated on a grassy knoll and surrounded by a ha ha. Badby Wood is not far away and is famous for its bluebells.

Daventry, to the north, is the nearest town and has a range of shops including Waitrose and Tesco. There is a leisure centre, a country park and golf courses at Hellidon, Staverton and Daventry. There are a wide choice of schools available including Rugby School, Rugby, Bilton Grange Prep School, Dunchurch and Stowe School, Stowe. There are good train services including from Banbury to London Marylebone and from Milton Keynes to London Euston which only takes half an hour. 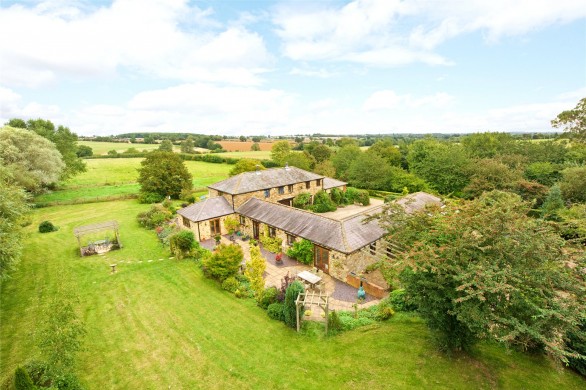 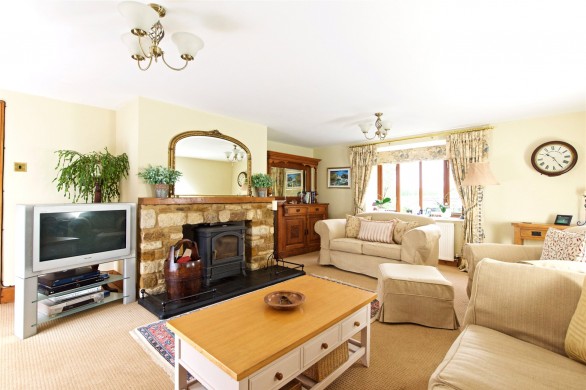 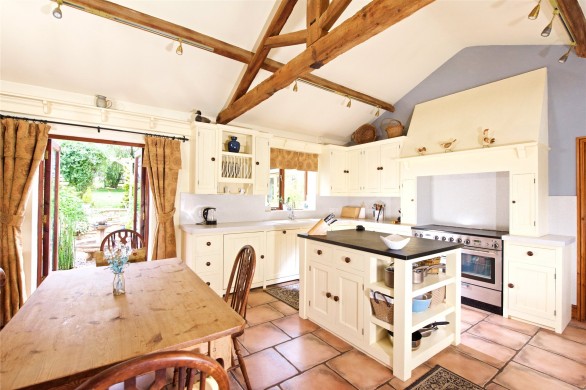 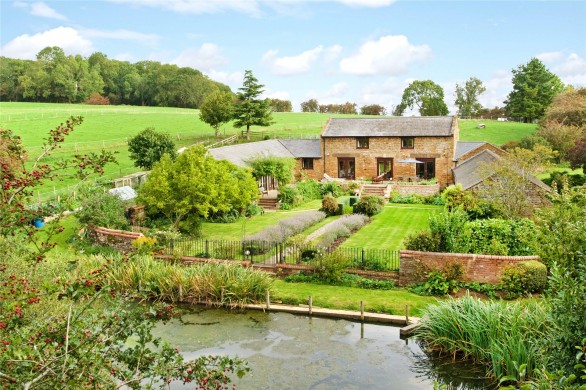 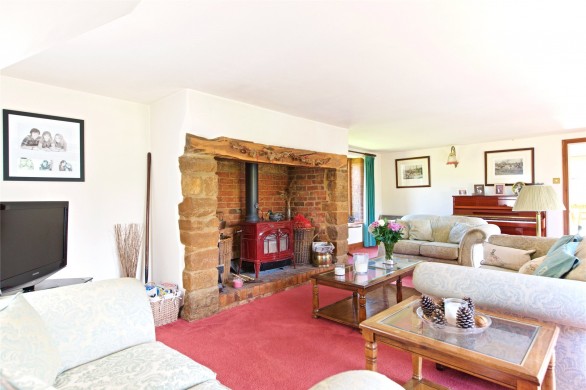 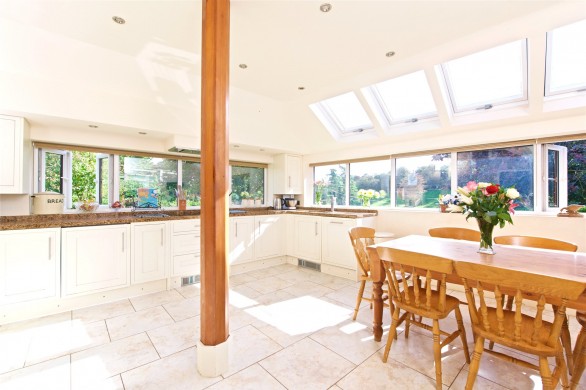