An 18th century seven bedroom, five reception room mill house and former mill with annexe potential, parking and a carport, and over 4 acres of landscaped gardens and paddocks.

Mill House and the adjoining mill have over 4,850 sq. ft. of versatile accommodation set over three floors. The two buildings are currently used as one property but there is potential to split the accommodation and use the original mill as an annexe if desired. The main house would then have four bedrooms, three bathrooms and three reception rooms while the annexe would have three bedrooms, two bathrooms and two reception rooms. There is secure gated parking for up to three cars in addition to the carport which has space for three cars. The landscaped rear garden has a patio and decking area overlooking the mill race and lawned gardens with several mature trees interspersed and well stocked borders. There is also a kitchen garden. The total plot is approximately 4 acres, 2 acres of which is paddock land.

There has been a mill in Flore since the time of the Domesday Book but the current Mill and Mill House are believed to date from between 1750 and 1800. It is an important building in the village and features, with the two churches and the school, on the Flore village sign. It also appeared on local postcards in the early 20th century and is a popular subject for local artists.

The front door leads into a glazed vestibule with a door to the reception hall which has York stone flooring. There is a feature open fire with a brick hearth, a bespoke stone surround from local stonemasons Boden and Ward, and a heat efficiency panel. There is an original built-in cupboard in the chimney recess. The window overlooks the front and has shutters. There are stairs to the first floor, and glazed double doors to the dining room.

Stairs from the hall lead down to a full height storage room which has a window, and power and light connected.

The drawing room has engineered oak flooring, painted panelling to dado height, and a fireplace with a marble effect surround, slate hearth and cast iron grate. There are original built-in cupboards, and part of a servant’s bell. The window has shutters and views to the front.

The kitchen/breakfast room has stone flooring and an original door to the boot room which has access to the cloakroom and a stable door to the garden. The kitchen is fitted with a handmade modular units with granite work surfaces and a butler sink. Some of the units are freestanding including a moveable island unit. There is also a dresser unit and a unit with a butcher’s block which are available by separate negotiation. There is a cast iron radiator, and an original ceiling timber with iron hooks. A Falcon range cooker with a five ring gas hob (LPG) and an electric oven is set in a brick chimney recess.

The utility room is fitted with floor to ceiling cupboards one of which contains a boiler. There is also a second wall mounted gas boiler. There are fitted units with work surfaces over incorporating a stainless steel sink. There is space and plumbing for a washing machine and a tumble dryer and there is also an airer suspended from the ceiling.

Original steps lead down from the kitchen to the pantry which has wall to ceiling storage units along one wall with space for an American style fridge/freezer. There is a window to the side, and a slate cold table with wine storage under.

Glazed double doors from the kitchen lead to the conservatory which overlooks the garden and the mill race and has doors out to the patio. The conservatory is timber framed with double glazed windows and dwarf walls.

Three bedrooms and the family bathroom are accessed from the first floor landing which has stairs to the second floor.

The family bathroom has a window to the side and is fitted with a four piece suite of a ball and claw foot bath with mixer taps and shower attachment, a bidet, WC and wash basin. The floor is engineered oak.

The stairs lead to the master suite with a sitting room which has engineered wood flooring and a window to the front overlooking the mill pond. There is a fireplace with a slate surround. The bedroom has an engineered wood floor, a window to the front, and a vaulted ceiling with exposed timbers. The dressing room has wardrobes spanning two walls and a door to the en suite which is fitted with an enclosed shower, twin vanity washbasins set in granite, a low level WC and a ball and claw foot bath.

The original mill was purchased as an addition to the property by the current vendors and has been the subject of a comprehensive renovation project. The architects, HDA Architects, aimed to “enhance the charm of the simple vernacular style but also create some dramatic interior spaces. The original structural beams and trusses have been retained to great visual effect with the building opened up to full height over the dining space” A new oak staircase was added and is visible to the top floor. The mill could be used as an annexe or can be incorporated with Mill House into one dwelling.

Doors from the reception hall lead to the dining room which has a stripped pine floor, double doors to the conservatory, and an oak glazed double door to the family room which was formerly the mill room and has an exposed brick wall and exposed timbers. All the timbers in the Mill have been restored and reinforced. An oak staircase leads to the first floor.

There is a mezzanine level, overlooking the dining room, which has exposed timbers and is currently used as a reading room.

The guest suite has double doors to a Juliet balcony overlooking the mill race. There are fitted wardrobes. The open plan en suite bathroom is fitted with an enclosed shower cubicle with overhead pan shower, twin vanity wash basins, and a double sided bath. The WC is in a separate enclosed area.

The oak staircase continues to the second floor where there are two further rooms and a shower room. Both the rooms could be used as additional bedrooms if required but are currently being used as a gym and a hobby room. Bedroom six currently used as a gym has glazed double doors to a Juliet balcony with views out to the side of the property. There are Velux windows to the rear. Bedroom seven has a Velux window to the rear. The shower room is fitted with a three piece suite with an enclosed shower, wash basin and WC. It is fully tiled and has mosaic tiled flooring.

Electric sliding gates give access to a cobble stone courtyard with a storage shed, parking and a 25 ft. carport with space for three cars. There is also a wood store. A gate leads to the garden which is landscaped and has an Indian sandstone patio, hedged borders, and lawned areas with a border of trees and shrubs. The lawns extend down to the paddock which is accessed via a five bar gate. There is a decking area which is cantilevered and projects out over the mill race which is not a navigable part of the river. A sluice flows under the mill with a gate which can be raised and lowered to control the level of the water. A laurel hedge runs along the boundary with the road. A kitchen garden has raised beds, a large storage shed and a greenhouse. There are approximately 2 acres of paddock which are surrounded by wooden fencing. The storage shed has electricity, and a water supply nearby and could be adapted into stables if required.

The recently bypassed village of Flore is situated approximately 7 miles to the west of Northampton and provides amenities including a post office, newsagent, garage/shop, primary school, parish church and a public house. Secondary school children progress to Campion School in Bugbrooke and private schools in the area include Northampton School for Girls, Northampton School for Boys, Spratton Hall, Quinton House and Rugby. The village is well placed for commuters being approximately 2 miles from the M1 (Junction 16) and with access to train services from Northampton, Milton Keynes and Rugby into London Euston.

The property has a right of way over the neighbour’s drive for vehicular access to the rear garden and paddock land.

The mill owner used to have the right to a toll from travellers over the bridge on one day per annum. 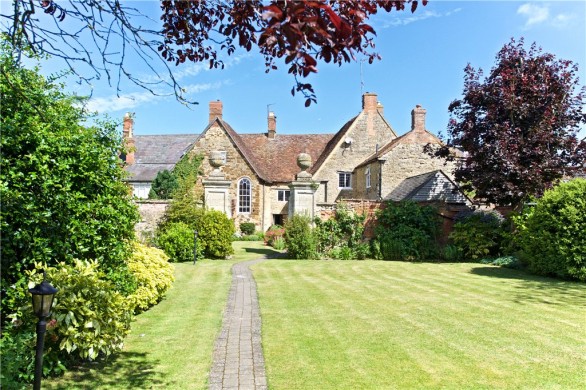 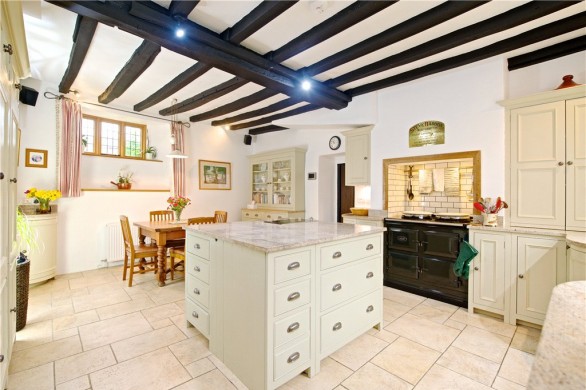 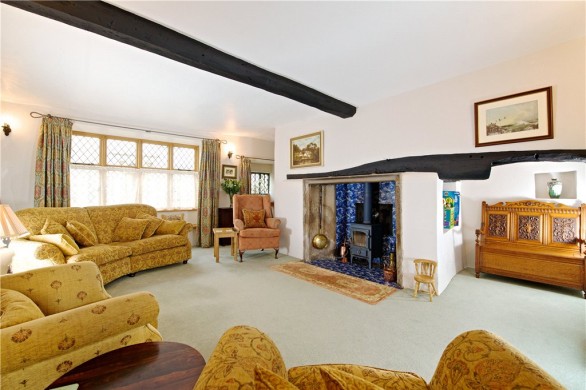