The Old Rectory has over 5,700 sq. ft. of accommodation over four floors and has been subject to an all-encompassing improvement programme restoring period features while adding modern amenities such as fibre optic broadband, remote controlled entrance gates and security cameras. A modern kitchen/dining room was created incorporating three rooms and extending into a void between two wings. It has a vaulted ceiling and a lantern roof light. The extension used traditional and reclaimed Victorian materials and windows were handmade by Holdsworth Bespoke Windows to match the 1840 originals. The kitchen and utility room are fitted with Swan bespoke handmade units with Silestone surfaces and these finishes are also used in the cloakroom and the five en suite bath/shower rooms, and there is Swan furniture in the library and bedrooms.

The Old Rectory was given Grade II listed status in August 1983. It was originally built in the mid-1800s by the Rev John Risley who became rector in 1841. In the “Annals of Akerley” it says the rector, at his own expense, “built the imposing looking house and laid out the beautiful gardens…The beauty of the Rectory is accounted for by the fact that Mr Risley employed Sir Gilbert Scott as the architect, who was also doing some good work at New College, Oxford.” Sir George Gilbert Scott is one of the most successful exponents of the Gothic Revival style. Among his best-known works are the Albert Memorial (1863–72) and the Midland Grand Hotel at St. Pancras Station.

Gothic Revival is an architectural style that began in the late 1740s in England and sought to revive medieval Gothic architecture. It uses features from the Gothic style, including arches, decorative patterns, finials, scalloping, lancet windows, and hood mouldings. The Old Rectory is of red brick with decorative blue diaper patterning, and has toothed brick eaves and stone quoins, window dressings and gable copings. The tiled roof has bands of ornamental tiles and a cusped crest to the ridge. There is a central gabled porch with stone dressings and a moulded perpendicular arched doorway with carved spandrels and rectangular central panel above.

Electric gates open onto a driveway that leads to a detached double garage and to two substantial parking areas. The front of the property is mainly laid to lawn with a range of mature trees and planting. To the rear there is a patio/entertaining area which has a step down to the main garden area which is laid to lawn with a selection of mature trees and planting. There is a new herbaceous border planted with over five thousand pounds worth of plants and bulbs from Preston Bisset nurseries. The entertaining deck and summer house are at the bottom of the garden by the paddock which is enclosed by post and rail fencing and is accessed from the side of the garden. The property also has a sunken LPG gas tank, and a grey water tank linked to the irrigation system.

Other improvements include an upgraded 50mm mains water feed, a new Worcester boiler and LPG gas central heating supplied from a gas tank hidden underground. There is hidden audio wiring for a Sonos internet sound system on the ground and lower ground floors and in the master bedroom en suite. These areas also have Ethernet connections allowing for multi room Sky or cable service. In the grounds there is an entertaining deck with a Julian Christian summer house which has mains power, heating and lighting, and a traditional Italian wood fired oven in brick housing. There is an irrigation system for the gardens, rainwater harvesting system to the rear and a well feeding the front. The rear garden is surrounded with parkland fencing. A new double garage was built using traditional materials to match the house. There is outside security lighting and remote controlled sunken lights on the drive. Full details of improvements are available on request.

An entrance porch with a wrought iron radiator opens into the entrance hall where there are stairs to the first floor. Bespoke gothic style glass panelled doors are used throughout the ground floor and the hall floor is tiled with Victorian tiles specially ordered from Original Style in Cheltenham. A bespoke gothic style glass screen separates the hall from the inner hall which has stairs down to the cinema room and a second staircase to the first floor. The cloakroom has limestone flooring, a WC, a classical style wash basin and a range of bespoke fitted storage by Swan.

The sitting room and drawing room both have bay windows and working fires with antique Breche violette marble fireplaces. The library/study has oak flooring, a range of bespoke Swan fitted library bookcases, and a built-in security safe. There is a fireplace with a wooden surround.

The cinema room is on the lower ground floor and has a bespoke hand built bar area, and a door leading out to the front of the house.

The kitchen/dining room has under floor heating and a vaulted ceiling with a large lantern roof light. The bespoke kitchen was handmade by Swan and has a comprehensive range of fitted units with Silestone work surfaces. There is a double bowl butler sink, an integrated dishwasher and space for a gas fired Aga. The central island unit has an integrated sink, a drinks chiller and a built-in Smeg double electric oven and five burner gas hob. The utility room is also bespoke with Swan units and Silestone work surface. There is a butler sink, space for an American style fridge freezer, a cupboard housing the pressurised hot water system, and a storage cupboard.

There are two bedrooms on this floor, both with en suite shower rooms comprising WC, wash basin and shower cubicle.

The Coach House formerly had a sitting room, kitchen and cloakroom on the ground floor and two bedrooms and a bathroom on the first floor. It is in need of refitting but all the upgraded services used in the main house have been fed to the Coach House which, once refurbished, would be ideal for use as an annexe for staff, guests or extended family.

Akeley is a village and civil parish about 3 miles north of Buckingham in the Aylesbury Vale district of Buckinghamshire. The village is on the Towcester road (A413) between the villages of Lillingstone Dayrell and Maids Moreton. The village name is derived from the Old English for "Oak Field". The Domesday Book of 1086 recorded it as Achelei. Akeley has a primary school (St James Church of England), a village hall and a wild life site. Although there is no longer a church in the village, church services are held regularly in the St James and St. John School hall. The property is in the catchment for the Royal Latin Grammar School in Buckingham. Preparatory schools nearby include Beachborough (Westbury), Winchester House (Brackley), Akeley Wood and Swanbourne, with senior public schools including Stowe School, Thornton College (girls) and Bloxham School. A range of shopping and leisure facilities, doctors and dentists can be found in Buckingham approximately 3 miles away. 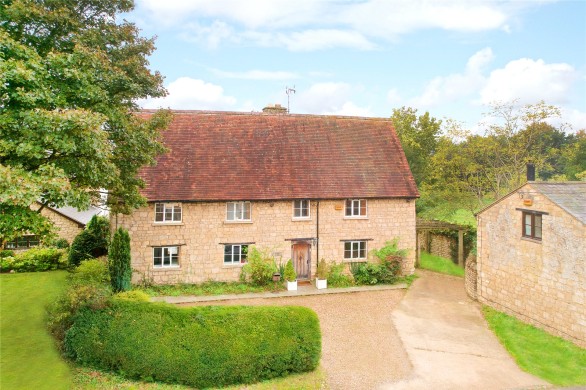